A rainy weekend heralded a particularly rainy start to the week on 20 May 2019. There was hardly any wind and no sun either. Thus, extremely unfavourable conditions for electricity generation from renewables. According to ENTSO-E, of almost 220 GW of installed generation capacity in Germany, around 26 GW was unavailable between 06:00 and 15:00, of which 0.8 GW was wind. Reasons for the unavailability included overhauls, for example the largest German pumped storage facility, Goldisthal, was not available at this time.

According to reports in several Swiss newspapers and confirmation from Swissgrid, Switzerland was on the verge of a blackout this morning due to a breach of the n-1 criterion.

The n-1 rule is a safety rule for the operation of the electricity grid. This safety rule states that at the maximum maximum load forecast by the grid operator, grid security must remain guaranteed even if one grid component fails. For example, a transformer station or power plant is always supplied via two lines (e.g. a ring line). If a component in the grid fails, e.g. one side of the ring feeder, or e.g. a transformer in a substation, there must be neither an interruption in supply nor an extension of the fault due to a cascade effect.

Here is an illustration of the cascade effect, after cutting the line between 14 and 16:

A calculation model is used to determine the network schedule for the following day. This means that a maximum load in the grid is forecast for the following day on the basis of empirical values, weather conditions and plannable major events, among other things, and then the grid topology is determined accordingly. In the event of massive deviations from this maximum load forecast, e.g. due to unforeseeable major events, n-1 violations can occur.

Background to the near-blackout

But back to Switzerland: The starting point of the critical situation was a massive deviation of the load flows between Switzerland and Germany from the schedules. According to publications by Transnet BW, the difference from the forecasts rose sharply from around 06:45 and reached 1780 MW at its peak between 10:45 and 11:00. This output corresponds to approx. 1.5 nuclear power plants. Over the period considered here, from 06:00 to 15:00, the deviation of 1145 MW on average is almost 75 percent above the average deviation of the first four weeks of May. 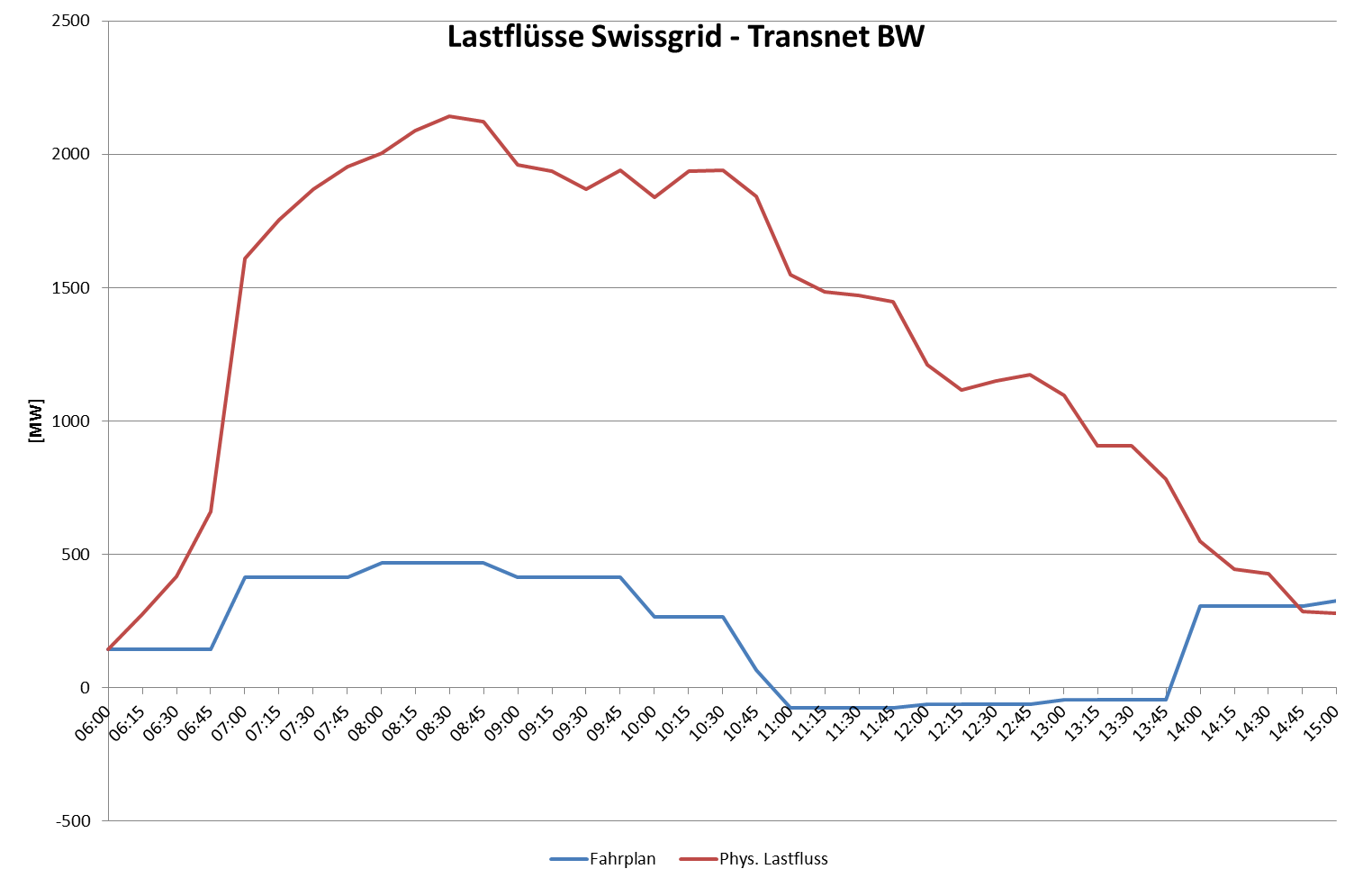 The decisive factor, however, was not the realised German consumption. This did not deviate unusually from the consumption forecast, and according to smard.de, generation within Germany was only slightly below German consumption. On the grid side, there is currently a shortfall of around 300 MW of net transfer capacity (i.e. the grid capacity available for trading between the countries) between Switzerland and Germany. This is due to the lack of a transformer (-200 MW) as well as the reduced capacity of a line (-100 MW). However, these missing 300 MW probably had no influence on the exceptional situation between Switzerland and Germany.

As Swissgrid states in its report, the deviation from the timetable is due in particular to trading. In fact, there was an exceptionally strong price increase in German day-ahead trading from just under 36 EUR/MWh to over 63 EUR/MWh between 06:00 and 08:00. While this price increase was known in advance, the price increase in intraday trading was particularly surprising. Between 06:00 and 09:30, the price rose from just over 30 EUR/MWh to over 79 EUR/MWh. The increase in Swiss intraday from 36.50 EUR/MWh to 60 EUR/MWh (epexspot.com) was much weaker in contrast. This price advantage in the Swiss intraday compared to the German intraday could ultimately have caused the strong flow from Switzerland to Germany. 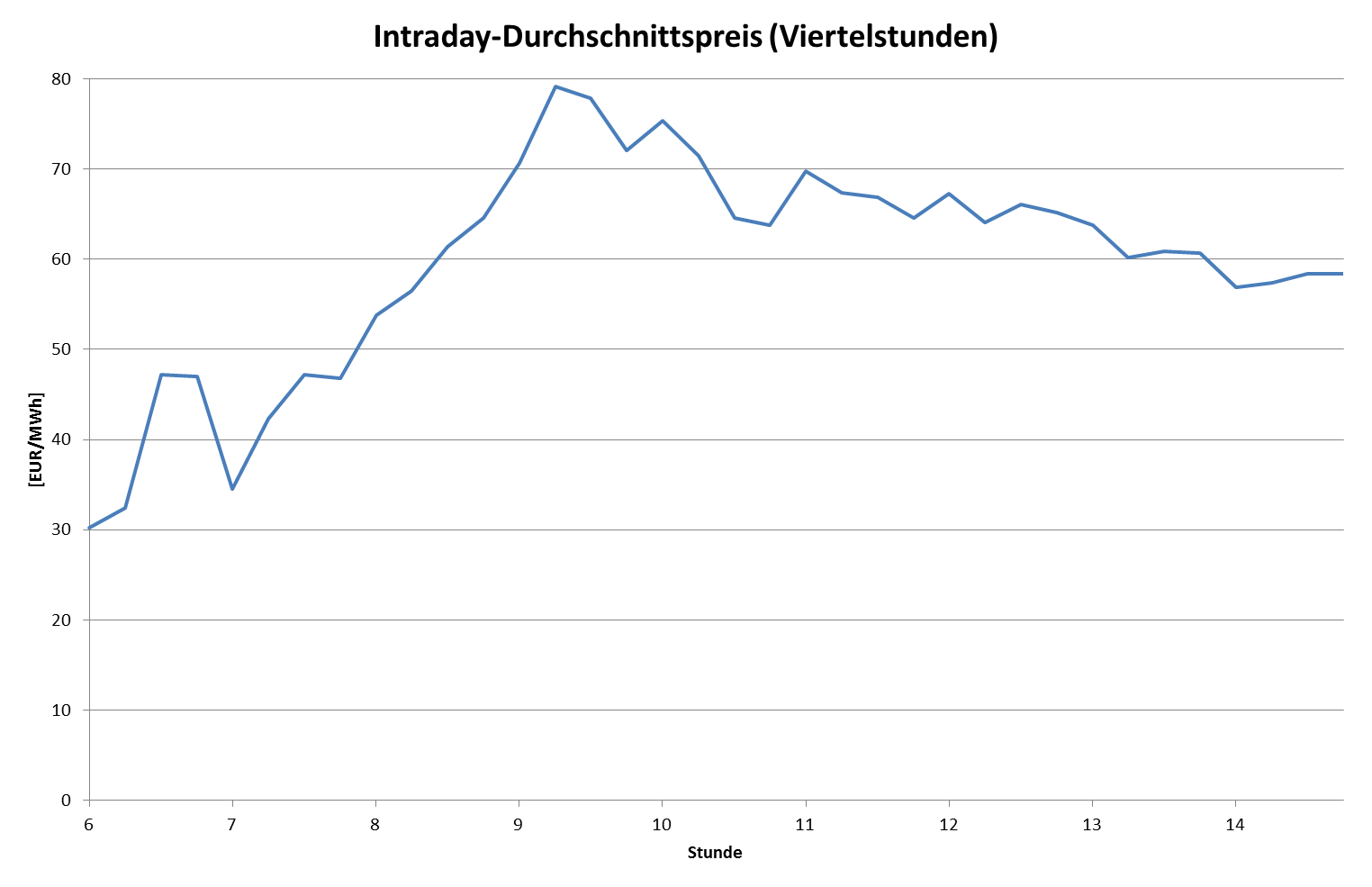 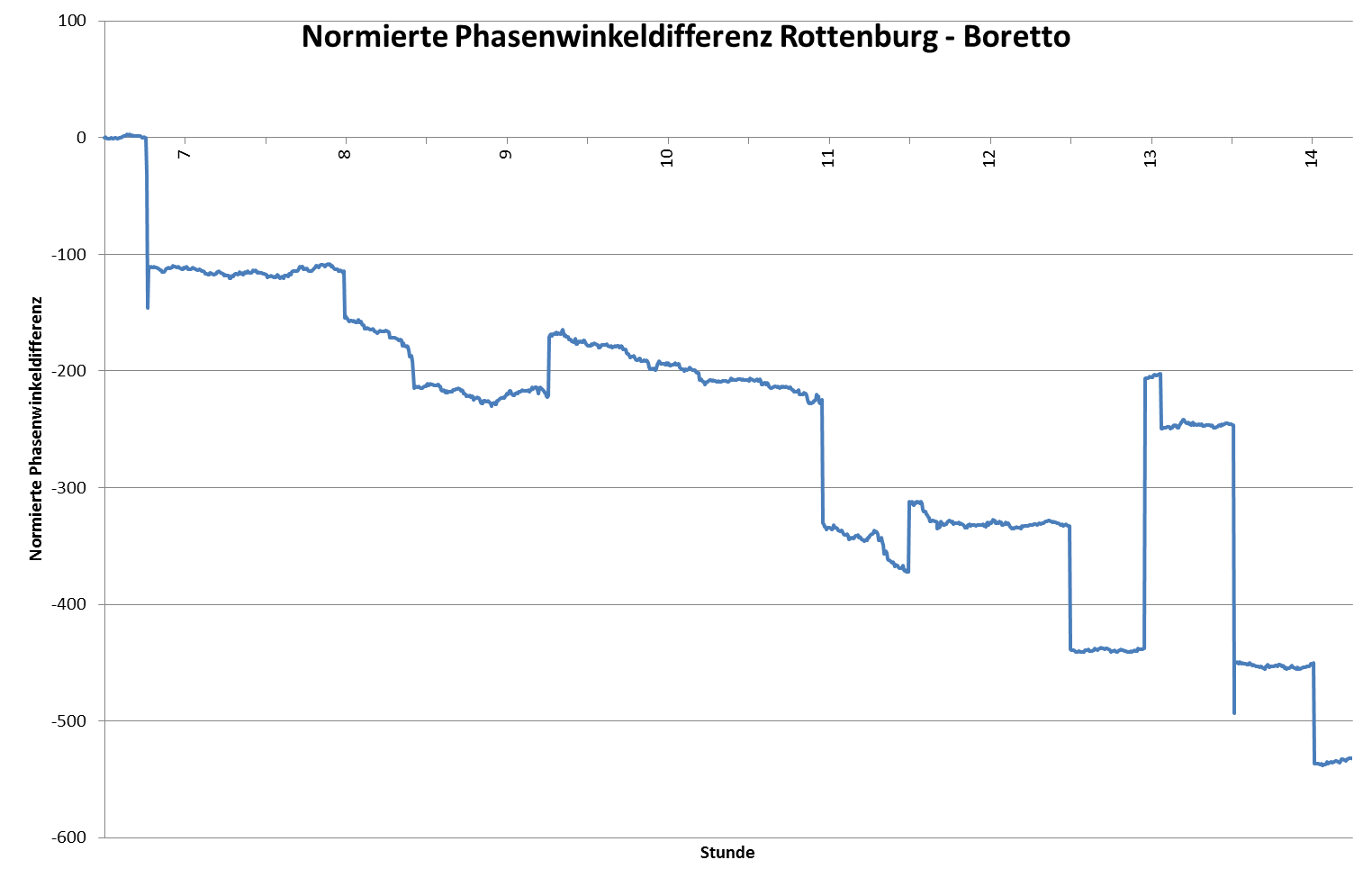 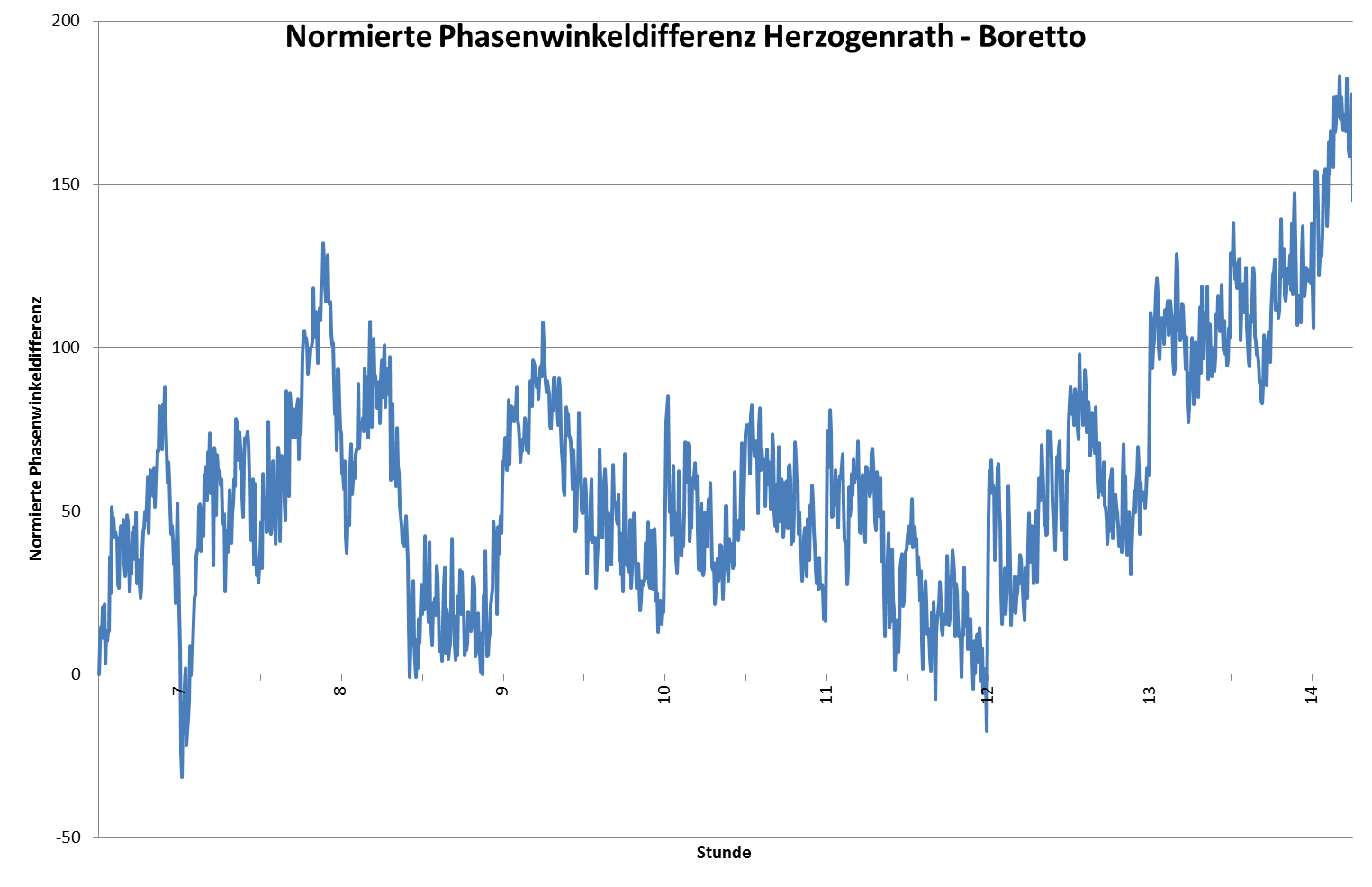 If one plots the the phase angle subtraction between this PMU and the recorder in Boretto, it becomes apparent that the three West German lignite-fired power plants in the region fed into the grid very strongly, especially in the early morning hours. This indicates that the power plants' generation follows the price development on the stock exchange. In the phase between 08:30 and 09:00, i.e. the one with the greatest deviation in the load flow, relatively less power was provided. From 09:00, however, i.e. at the highest intraday price, massively more power was generated. The jump at 10:00 and the countermovement before 11:00 show the implementation of a redispatch of the Niederaussem and Neurath power plants.

Findings from the observation

In general, it should be noted that such an incident is not (or no longer) unusual, especially in times with few renewable generators in the system. However, the severity of such an incident - and thus its potential risk for the system as a whole - is difficult to predict. The forecast deviation combined with the strong export flow resulted in n-1 violations in Switzerland. These represent a violation of grid security and can lead to a blackout, as grid stability is then no longer guaranteed. The recently published short-term and long-term analyses of grid frequency and the phase angle difference between our measuring stations distributed throughout Europe show that special situations and major deviations from the normal situation occur precisely when renewables are missing from the system. With little renewable generation contributing to the grid, the behaviour of trading actors obviously has a particularly strong impact on grid stability.

Real-time information, such as that provided by Gridradar, can warn industrial companies or service providers affected by grid disruptions at short notice. However, in order to generally prevent such effects as this near-blackout in the middle of the European interconnected system, it is urgently necessary to once again keep a closer eye on the European system as a whole. Short-term political sensitivities with long-term consequences should not be allowed to influence the successful cross-border cooperation of transmission system operators. Therefore, in our view, Swissgrid's suggestion that Switzerland should once again be included more strongly in the load flow calculations of neighbouring countries should be followed as a matter of urgency.